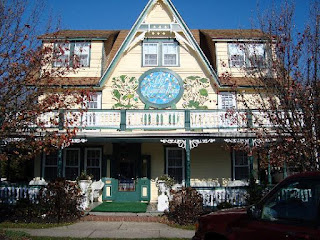 Henry Hudson’s ship the Half Moon dropped anchor off the shore of what we know today as Long Beach Island, New Jersey.  The inlet was composed of broken islands that were named “Barendegat”, which translates to the Inlet of Breakers to warn navigators to be cautious.  Railroads boomed during the Victorian Age as they expanded their lines to include Long Beach Island.  Trains brought crowds of fashionable, rich vacationers here to escape the congested cities.  The desire to spend time close to the beach grew as hotels and beach homes developed in town.
The Magnolia House is one of the oldest original Bed and Breakfast Inns on Long Beach Island.  It is located in the heart of Beach Haven.  The Magnolia House was built during the Victorian Era and has an architecture style known as Gothic Revival, Victorian Gothic or Neo-Gothic.  Features of Gothic Revival architecture include:
·         Pointed windows with decorative tracery
·         Oriel windows (windows that usually contain a window seat)
·         Grouped chimneys
·         Asymmetrical floor plan
·         High pitched roofs or spires
·         Exposed structural beams
.
The Baldwin Hotel in Beach Haven was one of the first resorts on Long Beach Island.  It was design by the Wilson brothers of Philadelphia.  They were a prominent Victorian era architecture and engineering firm based in Philadelphia, Pennsylvania.  Unfortunately in 1885 the hotel burnt down.  A rebuilt Baldwin Hotel burnt down once more in 1960.  A new re-creation of the hotel is currently in talks.
Long Beach Island is not only a beach town, but a town full of history as well.  If you would like become a part of history, contact us today to start building your custom home.
Posted in building a new home, jersey shore homes, long beach island new jersey, new construction in new jersey, new construction new jersey, new jersey new construction