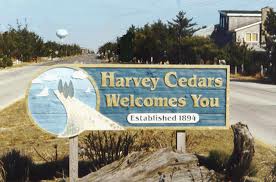 Back in 1751 Harvey Cedars was nothing more than a hammock and a clump of cedars called Harvest Quarters due to it’s harvest housing used by early farmers and the cedars that grew in the area.  Throughout the 1800’s it eventually became known as the Harvey Cedars we know of today. Predominantly occupied by whalers in the early 1800’s who set up a lookout on the northern edge of Great Swamp above the highest dune giving them a good vantage point to spot the whales they were hunting.
Harvey Cedars is no stranger to the effects of hurricanes and in 1821, a hurricane made a direct hit to the Jersey coastline which destroyed the freshwater swamp when the seawater breeched it and the great forest at the south end of town was lost to the sea.  The stumps from the trees were visible during a blowout tide in 1900 and again the 1930’s.  The high dunes were covered with lush growth of bayberry, cedar, sumac, poison ivy and holly and the salt marshes stretched to the bay.
In 1886 the Harvey Cedars Beach Co. purchased land from Sussex to Bergen Avenues and most of the activity in the early 1900’s was centered among the lifesaving station and the Harvey Cedars hotel.  During that time families from Pennsylvania and the surrounding area began building large summer homes on the island.  The Borough of Harvey Cedars was formally incorporated in December of 1894 and has continued to be the thriving summer resort town that visitors described back in the 1900’s.
Sitting between Loveladies and North Beach on Long Beach Island, Harvey Cedars has become a building paradise, with many custom homes along the bay or oceanfront priced at $2 million or more.  The boroughs quiet family atmosphere and bay and ocean access make it ideal for second homebuyers looking for a summer getaway and seasonal use custom homes.  With thriving businesses, restaurants and tourist areas, Harvey Cedars is a vacation oasis, as well as home to many year-round homeowners, who like to use local firms for building and construction.  One advantage to building in Harvey Cedars is that the ground is high and dry.  It also offers everything for building custom homes, from bayfront to oceanfront and everything in between.
With a history rich in maritime influences and summers spent in leisure by families from all over the tri-state area, Harvey Cedars has not lost it’s charm and ability to attract those seeking the warmth of the sand and sun and the salty freshness of the ocean.  Stonehenge Building and Development has been providing custom home building in Harvey Cedars for several years and is looking forward to continuing our work in this quaint town on LBI.  For more details on custom home designs check out our portfolioon our website or contact us today.
Posted in builder lbi, custom home builder harvey cedars, custom homes on lbi, harvey cedars nj, LBI builder, long beach island